Apparently, Hollywood is tired of our species. The original Planet of the Apes movies were typical of dystopian science fiction of the time; long on moral outrage but fundamentally humanist. The apes were largely despicable caricatures, with sympathetic exceptions, while the humans were long-suffering archetypes of fallen heros struggling for biological redemption.

The new Apes movies have taken a very different view of humanity.  We are arrogant, brutally violent and weak in both mind and body. We are bound for self-destruction if not extinction and, at heart, we know we deserve it. Our sin is so vast and abyssal that denial is the only insanity. Why would we not calmly accept our fate and pass from the earth with some dignity so that a now superior ape species can gracefully take our place?

You’ll have to answer this for yourself. The only humans in this movie are barbaric caricatures, while the apes have become humanity perfected. Well, there’s the mute blond girl, Nova, but we’ll get back to her. War for the Planet of the Apes is like the French noir version of an American classic; there is hope only in the shadows. I’m not sure if it’s meant to be a suicide note left by humanity or just an allegory for American downfall, but I am sure it’s incredibly irritating. Like rubbing your eyes with a power sander. No one should glorify their own self-loathing this much.

Why do I feel thusly? Allow me to enumerate:

1 / The Apes are too Saintly in their Suffering

They are not just an oppressed group, they’re every oppressed group. They’re oppressed African slaves (and please don’t pretend you missed that metaphor); they’re tormented Jews escaping across the desert led by the prophet Cesar-cum-Moses; they’re Native Americans who just want to be left along on their land; they’re every species driven to the edge extinction; they’re every lab animal tortured in a cage; they’re every wrongly convicted prisoner shived in the yard; they’re every sensitive kid who got picked on at school; they are disadvantage personified, nay, apified.

All of which is just a long way of saying that the emotional manipulation is too complete. The saint-like suffering of the apes is like a genetic crucifixion right down to the muscular abs. We get it. They have it rough. Thank God they have Cesar to act as Jesus, Moses and Gabriel all at once.

There is of course nothing intrinsically wrong with this. Movies manipulate us all the time. The question is, to what end. And in this case the end is one in which we feel such empathy and compassion for the apes that we cannot help but despise ourselves.

2 / The Humans are too Pathetic

In contrast to the apes, humans have apparently learned nothing from the plague, wars with the apes or the downfall of human society. We remain brutish and cruel, violent and devoid of even the slightest compassion. Given the choice between sharing the world with the apes and exterminating ourselves, we always choose self-annihilation. Woody Harrelson as Colonel McCullough and lead human character is the cartoonish manifestation of this irrational hatred and selfishness. Would he kill his own son to further his own manic ends? Of course he would. This would be a spoiler if it were not so obvious. 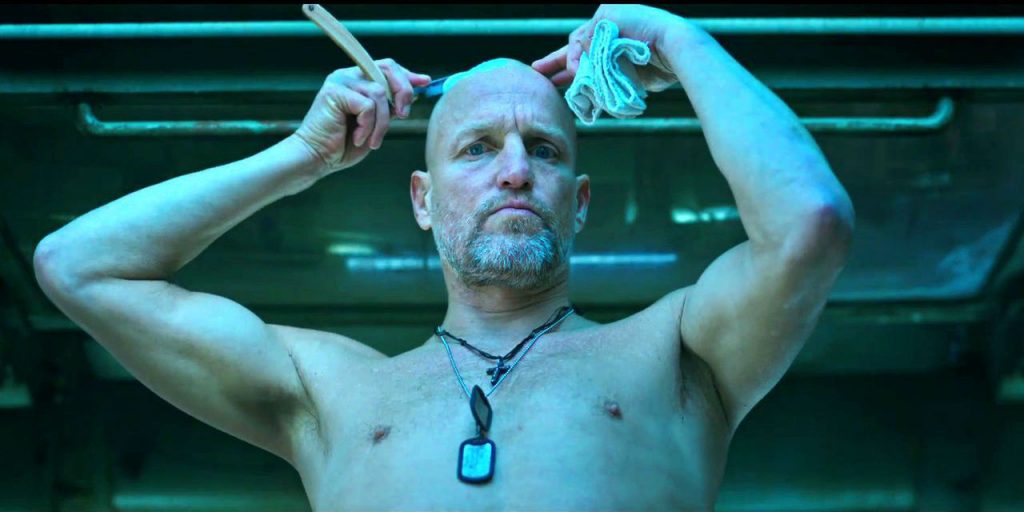 Lest you think that humanity beyond the Colonel is worthy of salvation, the director is careful to make sure almost every human character beyond Nova is violent, idiotic, white and male. We might care if a black man or woman died. But a white man in military gear with the IQ of a lemming? Death is a kindness.

And this is the key message of the movie. Animals are naturally kind and compassionate, resorting to violence only in defense. Humans are naturally hateful scum writhing in their own emotional waste. Given a choice between the two, is there anyone who would not side with the saints of simianity? Of course not. And if there are, they probably voted for Trump anyway 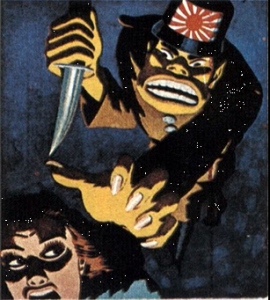 This is the Enemy

This may seem like a lot of whining, but movies are now and long have been one of the most effective forms of social propaganda available in a nominally free society, and both Hollywood and politicians know this. During WWII, movies and training videos were produced by the US government for the soul purpose of dehumanizing Japanese soldiers as Asian jungle scum. This of course fit well into the contemporary theme of white supremacy and was not fundamentally different from how Nazis equated Jews to rats and sewer vermin. The purpose was the same; to reduce the enemy to something sub-human and thus deserving of extermination.

It is of course always dangerous to read too much into a fictional movie, let alone a science fiction remake. It is primarily entertainment and that means it’s about money. The problem is that this message sells. We hate ourselves, and we are grateful that Director Matt Reeves has justified the contempt we feel for our species. Now all we have to do is wait for the plague or climate change to deliver us from our undeserved existence. Ahh, inspiration.

Those of you who were awake during film theory may remember that King Kong is one of the most blatantly racist movies of all time. It is not subtle. The island natives are gibbering black-faced lunatics. The powerful black ape is taken in chains from his primitive island in the hold of a ship after being seduced by the beauty of the palest of white women. This ape slave cannot speak or understand the world of white men, but he can pound his massive chest and steal white ladies. That is, until he tries to climb the tower of western accomplishment and is taken down by the ingenious inventions of civilized men. It was not beauty that killed the beast, it was white supremacy.

Not Kong, but you get the idea | Courtesy of TBD

Which is why you always have to be careful when you mix monkeys and white ladies in modern film (unless it’s Diane Fossey). Rather than avoid this troublesome trope, Reeves flips the switch by code-naming Cesar “King Kong” and then pairing him with Nova, the orphaned and mute but still pretty little white girl. Now the ape is eloquent, humane and compassionate while the white girl is speechless and utterly dependent on him for survival. I can’t figure out if Reeves is trying to apologize for the racism of King Kong or is just admitting that we had it wrong all along. Maybe it was really the white man who was always the true animal.

But wait, we’re not done. Not only is the girl now not the downfall of the black ape, but instead she is the bane of humanity itself. As the bearer of yet another disease (apparently one plague was not enough), Typhoid Nova and her little doll can reduce any man to a mute, drooling beast in mere hours. And of course she loves the apes more than the men she lays low. How can she not? The odd thing about this metaphorical shift is that the white woman is preserved as irresistible lure and trap; the only change is which type of man falls in.

Which brings us, oddly, to the lost tribe of simians wandering in the desert. As the film closes, Cesar leads his rag-tag fugitive fleet, I mean a raggedy herd of downtrodden apes, across the desert to the promised land. There is a wonderful shot of apes strung out across the Arizona desert near Monument Valley as they near their destination. Lest you think this a subtle point, here is Wikipedia on the analogous part of Exodus:

“After the Ten Plagues, Moses led the Exodus of the Israelites out of Egypt and across the Red Sea, after which they based themselves at Mount Sinai… After 40 years of wandering in the desert, Moses died within sight of the Promised Land …”

In the movie, we get two plagues, a sea of red sand and Cesar dying within site of the simian mountain refuge and promised land.  Okay, we get it. The apes are downtrodden. They are the hands-down, all-time, award-winning metaphor for victimization. Just give them a safe space already.

I’m not even sure this is intentional in the movie, but I’ve been reading a lot lately about social justice and “privilege theory.” Privilege conceptually just means that some groups have unearned advantages over others and social justice thus requires these privileged (generally white, male folk) to “check their privilege” in order to bring out social justice and equality. When you read about this stuff, it tends to become the lens through which you see everything and I’ll readily admit that my confirmation bias is undeniable.

Still, and given that Reeves exists in the middle of the same politically correct environment that regularly promotes privilege checking, I have to assume he’s familiar with the concept. So when you combine the ape victim and human tyrant metaphor with the movie’s second plague, it just feels like he’s turned the masochism up to eleven.

What second plague? Well, it turns out that it’s not enough for the first plague to exterminate most of humanity and concurrently make apes super brainy. No, you need another plague that reduces the remaining humans to  speechless, gibbering…apes. I’m not kidding.

And thus the movie fully checks human privilege generally and white male privilege specifically in the most literal and horrific manner you can conceive (in a PG rated movie). We’re taking your intelligence, your speech, your civility, your sanity and your cute little blonde girl. And if that’s not good enough, then God is going to smite you with a surprise avalanche and take your very existence. Privilege checked and mated, whitey. Suck on that!

More seriously, the self-flagellation here must be what every conservative sees when they hear hand-wringing negativism from every whiny liberal they see in video outtakes from Breitbart. There is a difference between making a point and beating the audience into submission with an allegorical hammer. Even if that hammer is beautifully rendered in RealD 3D CGI.

Sometimes we liberals hate ourselves just a little too much. It’s not healthy. Self awareness and critique is fine. Self loathing and destruction is not. Science fiction of the past was almost always a hopeful endeavor. Even the most dystopian vision was meant as cautionary tale rather than prediction or expectation. But Apes sells doom as the darkness we should embrace. Maybe we’re not worth saving as a species. But I don’t need to pay to have a multi-millionaire cram his anti-humanist misery down my throat. I’ve got MSNBC for that.

More seriously, if you enjoy this movie, I have to wonder if you’ve given up on humanity. You might respect Apes’ technical mastery, love the individual characters, laugh at Bad Ape’s worse jokes, and totally miss the how all the gloriously white people at the end are killed by a giant white act of a presumably simian god, but you cannot truly enjoy this movie if you can stand to look at yourself in the mirror.

And that’s just sad, for all of us.

Or I may be reading too much into this. My caramel popcorn was stale.